This method works on the material surface using a magnetic flux, magnetic ink and a background contrast colour. This can be used to detect surface breaking and near surface discontinuities that can be problematic to the function and life of the material under test. MPI on welds on pipelines, structures, storage tanks and pressure vessels fabricated from ferro-magnetic materials e.g. carbon steel, to the client’s specifications, international standards and acceptance criteria. This method can be fixed via a bench unit or mobile, using a powered or permanent magnet, using solvent based consumables for general use and water based consumables thus enabling its use in confined spaces such as pressure vessels.

This method works on the material surface using capillary action and a developing agent to highlight the dye bleed-out. This can be used to detect surface breaking discontinuities that can be problematic to the function and life of the material under test. DPI on welds on pipelines, structures, storage tanks and pressure vessels fabricated from ferrous and non-ferrous materials, e.g. stainless steel and aluminium, to the client’s specifications, international standards and acceptance criteria. This method can be fixed using a bench unit or mobile, using solvent based consumables for general use and water based, thus enabling its use in confined spaces such as pressure vessels and pipelines.

Magnetic particle Inspection (MPI) is a non-destructive testing (NDT) process for detecting surface and slightly subsurface discontinuities in ferromagnetic materials such as iron, nickel, cobalt, and some of their alloys. The process puts a magnetic field into the part. The piece can be magnetized by direct or indirect magnetization. Direct magnetization occurs when the electric current is passed through the test object and a magnetic field is formed in the material. Indirect magnetization occurs when no electric current is passed through the test object, but a magnetic field is applied from an outside source. The magnetic lines of force are perpendicular to the direction of the electric current, which may be either alternating current (AC) or some form of direct current (DC) (rectified AC).

A technician performs MPI on a pipeline to check for stress corrosion cracking using what is known as the “black and white” method. No indications of cracking appear in this picture; the only marks are the “footprints” of the magnetic yoke and drip marks.

A close-up of the surface of a (different) pipeline showing indications of stress corrosion cracking (two clusters of small black lines) revealed by magnetic particle inspection. Cracks that would normally have been invisible are detectable due to the magnetic particles clustering at the crack openings. The scale at the bottom is numbered in centimetres.

The presence of a surface or subsurface discontinuity in the material allows the magnetic flux to leak, since air cannot support as much magnetic field per unit volume as metals. Ferrous particles are then applied to the part. The particles may be dry or in a wet suspension. If an area of flux leakage is present, the particles will be attracted to this area. The particles will build up at the area of leakage and form what is known as an indication. The indication can then be evaluated to determine what it is, what may have caused it, and what action should be taken, if any.

There are several types of electrical currents used in magnetic particle inspection. For a proper current to be selected one needs to consider the part geometry, material, the type of discontinuity one is seeking, and how far the magnetic field needs to penetrate into the part.

Each method of magnetizing has its pros and cons. AC is generally the best for discontinuities on the surface, while some form of DC is better for subsurface defects. 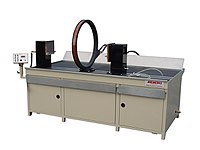 An automatic wet horizontal MPI machine with an external power supply, conveyor, and demagnetizing system. It is used to inspect engine cranks. 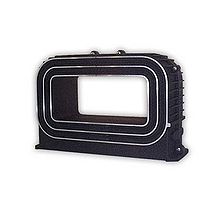 A pull through AC demagnetizing unit

A common particle used to detect cracks is iron oxide, for both dry and wet systems. 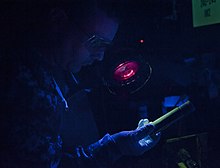 It is common industry practice to use specifically designed oil and water-based carriers for magnetic particles. Deodorized kerosene and mineral spirits have not been commonly used in the industry for 40 years. It is dangerous to use kerosene or mineral spirits as a carrier due to their low flash points, and inhalation of fumes by the operators.

The following are general steps for inspecting on a wet horizontal machine:

This site uses cookies: Find out more.
Go to Top